QUEZON CITY – Kuya Maki and the whole Pangkat Oyayi visited “Umagang Kay Ganda” on Monday and “Ready, Get, More!” on Thursday, October 17 and 20, 2016, respectively. This is to uncover the surprises in the newest kiddie show for the whole family titled Oyayi, produced by CBN Asia and the National Council for Children’s Television (NCCT). 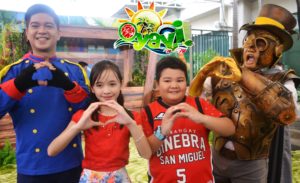 “Umagang Kay Ganda” is an early morning infotainment TV show in ABS-CBN airing during weekdays from 5 AM to 8 AM where kiddie hosts Mutya Orquia and Clarence Delgado, danced together with Pangkat Oyayi – Kuya Maki, Tama Raw, Bon Haribon, Diva Butanding, Tarsiera, and Dok Pil, to the rhythm of Oyayi’s theme song sang by the former “Voice of the Philippines” contestant and Rivermaya vocalist, Jason Fernandez.

“Ready, Get, More!” is a morning radio program in DWRR-FM, more popularly known as, MOR 101.9 ‘For Life’ hosted by DJs Papi Charlz and Yumi, where Pangkat Oyayi expressed that family time is Oyayi time as they embark on adventures packed with remarkable lessons in very creative and entertaining ways. 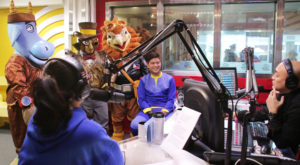 Moreover, Kuya Maki reveals the unique qualities of Oyayi among other shows for children. “Ang bago dito, apat na ‘A’ ang tawag ko, mas Action-packed, mas punong-puno ng Adventure at ang mga Amazing na Aral.” (What’s new in this show is what I call the 4 “A’s,” which are – more Action, filled with Adventure, and Amazing Lessons or Aral in Filipino.)

“We have to encourage their (kids) curiosity all the time so this is what it’s about,” adds Kuya Maki, whose name was derived from the primary character of his role, mahilig MAKIalam, MAKIusyoso, at MAKIbahagi (loves intervention, investigation and involvement).

Oyayi carries its purpose, which is to provide quality kid’s show that will inpire children to become good citizens of the country at their young ages.

This is the final week for CBN Asia and NCCT in promoting this informative and engaging kiddie show that has new super cute characters.

Oyayi airs its very educational and fun-filled episodes every Sunday, 9:30 AM at ABS-CBN starting October 23, 2016.